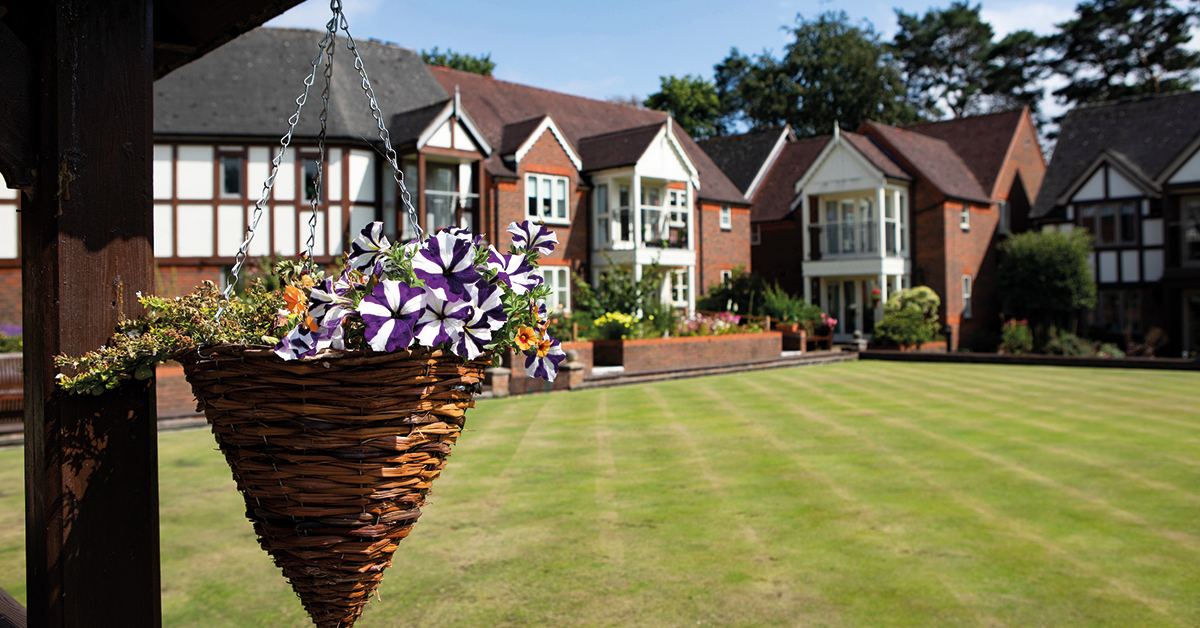 
For over 25 years, Richmond Villages has been operating award-winning retirement communities around the UK, helping residents start a new chapter and live life to the full.

Our village teams work tirelessly to help residents live longer, healthier, happier lives while hosting community events, guest talks and fundraising activities for local and nationwide charities that are close to the hearts of our staff and residents.

Over the years Richmond Villages Nantwich has been home to many fantastic events, from their annual community dog show, to hosting pantomimes for the residents, families, and local community.

In addition, the Village has also raised money for local charities with most recently the staff and residents coming together to collect belongings to donate to the Afghan refugee children of Manchester with the help of Wych-Malbank Rotary club.

In 2003 Bede Village, near Coventry in Warwickshire, was acquired. The Village underwent a major refurbishment plan with the development of assisted living village suites, a restaurant and lounges which completed in 2005.

The staff at Richmond Villages Bede organise a comprehensive activities schedule, complete with village events, from open days to entering national art competitions. Every year the village hosts its own Summer and Christmas fayre while finding time to fundraise for local charities, with one of the most recent charity events being a quiz night in aid of The Air Ambulance Service.

Over the years Richmond Villages Northampton have hosted many guest speaker evenings, themed nights, and charity events. The Village celebrates the Alzheimer’s Society’s annual Dementia Awareness Week and has even had an Elvis impersonator help raise funds. Guest speakers aren’t the only visitors that like to visit our residents at Richmond Villages Northampton, in the past the Village has also welcomed therapy ponies to meet the residents.

Being the first Village to have a Wellness Spa, Richmond Villages Painswick leads a busy activities programme that helps residents keep a healthy mind and body. The Village often hosts “Fitness with Care” days which include taster sessions in activities such as, Tai Chi, fall prevention, self-defence, and ‘Balls of Energy’ (seated armchair aerobics) classes, as well as offering free health checks, access to Nintendo Wii games and much more. Painswick also has a great connection with the wider community and most recently welcomed in Soprano, Emily Yarrow, for an evening of opera.

Over the course of the last year, the team at Painswick have also supported the tremendous efforts of local emergency service and NHS workers, hosting a Blue Light Brunch, free of charge.

Reminiscing on the event, Oliver Kyte, Head of Hospitality, said: “The hard work that our local emergency services have put into keeping our residents as safe as possible throughout the pandemic is something that we are eternally grateful for. Our delicious brunches are renowned among our guests at the village, as well as visitors, therefore we thought what better way to give back to our community heroes than hosting a special, dedicated brunch for them. The event was a huge success, and we look forward to hosting more in the future.”

2010 saw the opening of Richmond Villages Letcombe Regis in South Oxfordshire. The Village was officially opened by Prince Edward, Earl of Wessex and was the largest village at the time, becoming the model for future Richmond Villages. Staff at the Village work hard to create an ongoing activities schedule for all residents to enjoy, hosting a series of open days and even giving residents the chance to enter national art competitions.

One staff member even arranged a “Tour de Richmond Villages” – a static cycle challenge back in 2013, aimed at raising funds for charity. The route totalled 441 miles, starting from Letcombe Regis, and taking in all the Richmond Villages; Painswick, Northampton, Bede, Nantwich and finishing at Witney.

In August 2013, Richmond Villages was acquired by Bupa – a perfect ‘marriage’ to provide high quality retirement living and elderly care. A plan was developed to start building new Richmond Villages on land already owned prior to the acquisition. The first of these was Richmond Villages Witney in Oxfordshire, which was launched in May 2014, with the Village operational by 2016.

Over the years, Richmond Villages Witney have been active in campaigns that promote Dementia awareness in the local community. From Turning Witney Blue, which sees the Village work alongside local community shops, businesses, clubs, and societies to support dementia friendly activities and welcoming spaces, to joining the Dementia Friends Campaign – aimed at educating people about dementia and the small ways communities can help.

Richmond Villages Witney also places importance in creating a thriving community within the Village, hosting an array of themed lunches, supper clubs and activities sessions throughout the years.

Speaking of his time working at Richmond Villages Witney, Andrew Osborne, Village Manager, said: “The past five years at the Village has been truly amazing. We love to provide our residents with new activities to keep things fresh and entertaining at the village. Just recently, we hosted a Penguin Therapy Day, making it a surprise for everyone, including our staff. The response was fantastic – everyone had a flippin’ great time and we look forward to welcoming the animals back!”

Close behind Witney was Richmond Villages Aston-on-Trent in Derbyshire, which was launched in November 2014 and became fully operational in late 2017.

When Aston-on-Trent first opened, the Village hosted “Get to Know Your Neighbour” lunches, where residents could get to know one another before moving into the village, creating a sociable community atmosphere around the village that still exists today. Residents’ wellness is always at the forefront of Richmond Villages Aston-on-Trent’s activity schedules, as they often welcome in members of the community for expert talks on Arthritis and self-management.

Charity fundraising is also at the heart of the village. Only last October, the staff climbed Snowdon – the highest mountain in Wales – climbing up and down the mountain in approximately six hours. The team’s valiant efforts raised over £2,000 for Huntington’s Disease Association and Oxfam.

Looking back at the day, Kerstin Taylor, Village Manager, said: “Being able to come together for such a rewarding occasion was truly memorable and one the team will never forget. I am so proud of everyone who participated, supported us and showed their appreciation. We are even more excited for next year when we plan to get our residents involved in some way for a full community event – perhaps a little less strenuous though!”

Throughout the course of the past year, the Village has hosted fitness classes out in the courtyard with staff even deciding to bring the beach to Wood Norton and host a beach themed pool party in the Wellness Spa.

Wood Norton has taken part in lots of fundraising over the years for a range of charities by hosting coffee mornings, supper clubs, raffles, and collating donations for the local food banks, most recently raising over £2,500 for Cure Parkinson's.

Richmond Villages Cheltenham, and all the southern villages, sponsored the local Cheltenham Cricket Festival in summer 2021, whereby residents attended throughout the week to enjoy a day of cricket whilst experiencing some Richmond hospitality. Staff also attended the cricket festival and hosted a prize draw, raising over £1,600 which was split between three amazing charities – Alzheimer’s Research, Sue Ryder Leckhampton Court Hospice and Longfield Hospice.

Richmond Villages Cheltenham is built on an old Dowty Heritage site, Gloucestershire’s global engineering group, and hosted its very own reunion afternoon tea last year for ex-employees of the site to come together and listen to a talk from guest speaker, Ally McConnell - Archivist for the Dowty Project.

Since opening, the staff and residents have spent lots of time raising awareness for charities close to their hearts, from a March dog walking challenge to raise funds for Dementia to hosting fortnightly Stroke Café meetings in the restaurant, in partnership with The Stroke Association.

Finally, our newest village, Richmond Villages Willaston is inspired by a transformational approach to dementia care from the Netherlands, with a philosophy to support people to live as independently as possible, for as long as possible. The model is quite different from traditional dementia care settings with access to 6-person households where like-minded residents can live and socialise together, carrying out routine, day-to-day tasks you’d find yourself doing at home, under the supervision of a specialist care team. Within the village is a 35-bed care home, meaning that those living with more advanced stages of dementia can benefit from further levels of care.

Richmond Villages Willaston has an extremely jam-packed activities schedule like all our villages, often hosting themed nights, such as Pizza and Karaoke night. Residents often visit the onsite hair salon, nail bar and treatment rooms, or even invite family and friends to dine in The Grove Bistro and Bar. As well as all the hard work and the thriving activities schedule, staff and residents constantly come together to raise funds and awareness for Alzheimer’s and dementia charities.

Over the course of the past 25 years, Richmond Villages has continued to grow, entertain and care for its residents, and support the local community and charities. Richmond Villages wouldn’t be the same without the help, hard work, dedication and support from our wonderful staff and residents which is why we would like to take this time to say a huge thank you.

We cannot wait to see what the next 25 years will bring!