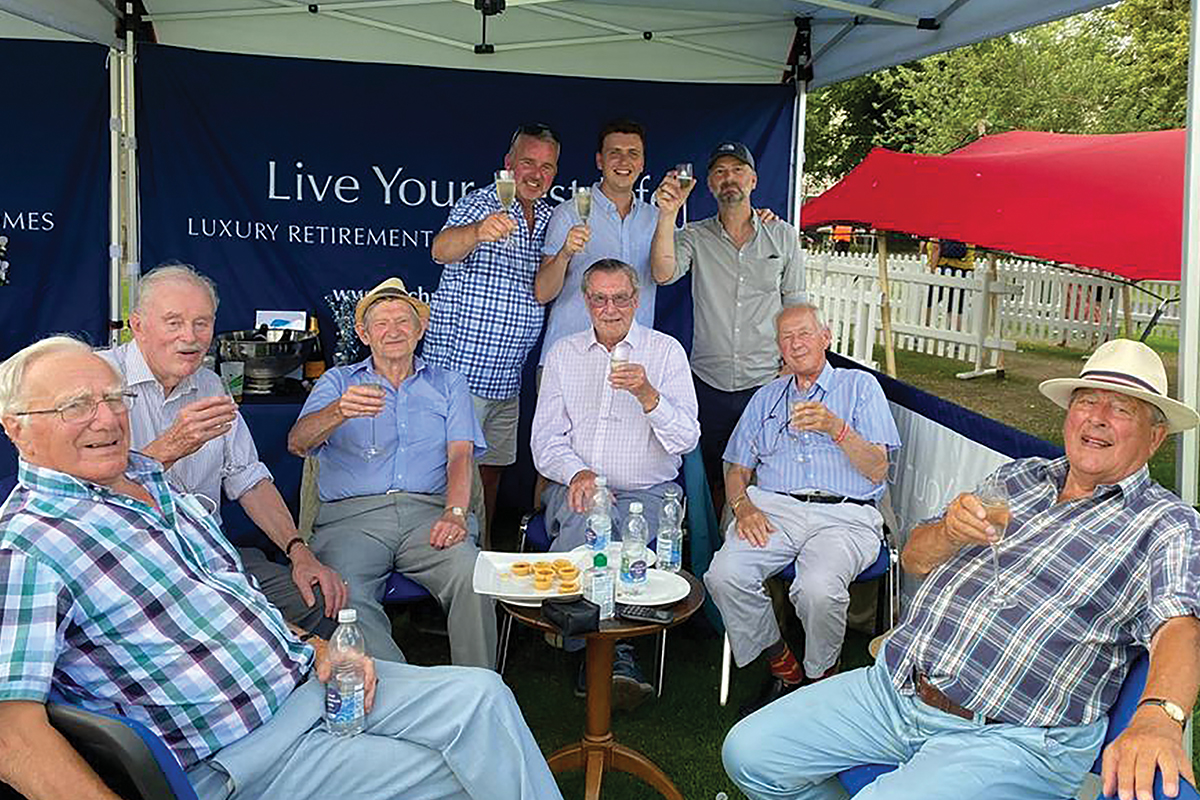 
Born in Birmingham, Antony spent his childhood in the countryside throughout the war, enjoying school sports such as hockey, cricket, and squash. Pursuing the world of finance, Antony became a stockbroker before moving to Cadbury’s, where he explored the world of advertising for 16 years, before starting his own finance

advisory business in Somerset - where he resided for 50 years and had four children before moving to Wood Norton to make the most of being closer to his two sons and four grandchildren.

Derek and Antony share similar career backgrounds, as Derek spent 40 years living in London as a stockbroker. He spent most of his career happily living in Tunbridge Wells in Kent with his wife, where they married and had two children - a daughter and a son. When his wife sadly passed away, Derek decided to move to Richmond Villages Wood Norton to be closer to his daughter, who lives nearby, while his son lives in America. During lockdown, Derek learned how to use Skype and video calls to stay in touch with his son in America, enjoying weekly calls with the whole family.

Since Antony and Derek moved to Richmond Villages Wood Norton, they have found friendship during lockdown, forming a close-knit group of six. When commenting on one of the key foundations of their friendship, Derek remarked that sharing a bottle of wine throughout lockdown has been a great way for the group to catch up - but without the headache of having to get a taxi or commute back home! The group also enjoy regular social events hosted by Richmond Villages, for example, a recent cricket festival, which recently took place at Cheltenham College was a particular highlight.

Commenting on the event and his new found friendships, Derek said; “I certainly have a better social life here at the village than I did before. It’s been great to get to know new people and form friendships with those who have a mutual appreciation for cricket. We regularly make good use of the restaurant, share regular lunches, catch up, and enjoy each other’s company. I initially visited Richmond in one of the guest suites to get a feel for the place before I moved here, and one morning, I took the opportunity to sit in the reception area reading a newspaper. I noticed that everybody who walked past me stopped and made an effort to say hello to me, which I think really demonstrates how friendly and welcoming the environment is here.”

Meanwhile, one of the key factors in Antony’s enjoyment of the village is the wealth of activities available to residents, “I don’t like sitting down and doing nothing, and I think people have a preconception that retirement means you won’t be busy anymore. However, since moving to Richmond Villages, I’ve enjoyed meeting lots of new friends, cooking in my own space, and enjoying the facilities here such as the marvellous swimming pool, gym, and bar. During the pandemic, it felt there wasn’t much impetus from the outside world, but I’ve felt very safe and looked after by the staff here.”

Maintaining and extending their social life has been a walk in the park for Antony and Derek since moving to Wood Norton. And they are both looking forward to attending social events with their new group of friends. Now that restrictions are lifting, they have a long boat trip planned with the village Activity Co-ordinator, which Derek is particularly looking forward to.

A regular member of their friendship group, resident Richard also added, “The cricket event was terrific; you’d be hard-pressed to find somewhere to live that is better than here. Before lockdown, several of us used to meet once a week for a social event, so it’s been really nice to be out together again, and I think it’s safe to

say that we’re all looking forward to being able to do activities more freely as lockdown continues to ease up.”

Antony, Derek and Richard are all looking forward to continuing their friendship after meeting at Richmond Villages and having their diaries packed full of activities with their wider friendship group, including the races at Stratford-upon-Avon in August.